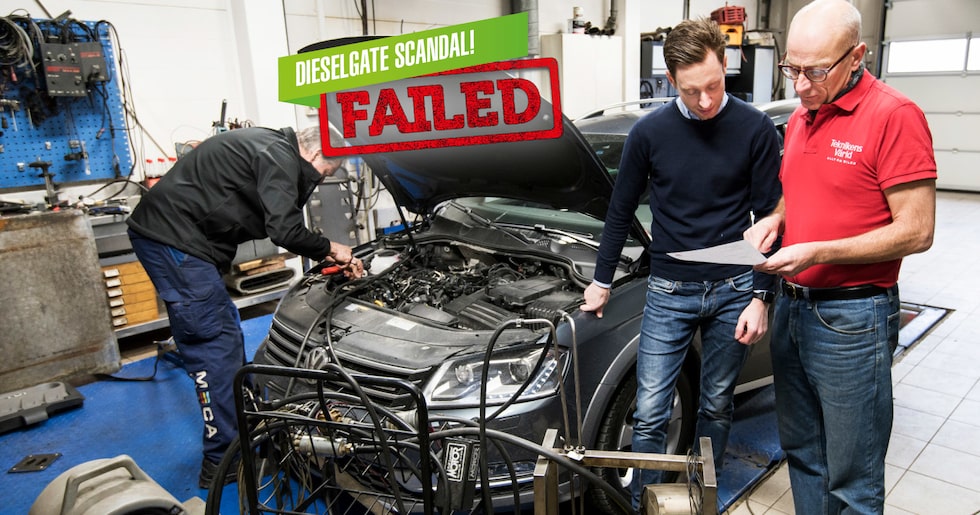 Ämnen i artikeln:  diesel Volkswagen Audi Seat Skoda In English Dieselgate NOx ea189
More than 228,000 Swedish cars are now going to be rectified by Volkswagen following the emissions scandal known as Dieselgate. Teknikens Värld have tested ten cars before and after the fix. It is clear to us that in many cases the driveability of the cars has worsened dramatically. It is not the same car as before the fix. “Volkswagen promised that the car would be exactly as before the measure, but that’s not true. My car is remarkably weaker”, says Passat owner Erik Lehfeldt.
https://youtu.be/mXG8cmH78JU

After having been caught manipulating the emissions purification Volkswagen has been forced to recall millions of European cars. In Sweden alone the number is 228,000 cars from Volkswagen, Skoda, Audi and Seat.

We must trust that the emissions purification now works the way it is supposed to. The cars are no longer able to tell if they are in a laboratory setting or out in the real world – the purification system is always in effect.

Modern diesel cars excel at high torque, having a lot of power already at low rpms. That means the cars are easy to drive, for example as a driver you don’t have to put your foot down too hard to gain speed for overtaking. By revving at low rpms, it has also been possible to maintain a low fuel consumption in modern diesel engines. This has been a part of the Volkswagen Groups marketing of their cars and engines.

But are the cars as good as before the reprogramming of the engines? We have tested ten cars of different brands – Skoda, Volkswagen, Audi – all from the Volkswagen Group, before and after reprogramming.

The results are somewhat different. Some cars have gained power and have a higher fuel consumption, but most cars have lost performance. Both torque and power have decreased after Volkswagen’s fix. The loss is as much as ten percent and in addition to that the torque curve has shifted. This means having to push down harder before the acceleration sets in – which makes the car feel weaker. On top of this the tests often show an increase in fuel consumption after the Volkswagen fix.

In effect the owner is not handed back the same car as before the recall. It is cleaner, but often both weaker and thirstier. When a car loses as much as ten percent of its torque it is noticeable in everyday driving, not just on a racetrack or in a lab. It is noticeable in overtaking and towing heavy trailers.

Erik Lehfeldt's Volkswagen Passat Alltrack is tested before and after the fix.

One of the tested cars is a four-wheel drive Passat Alltrack. Before going to the Volkswagen workshop, we measured 176 horsepower and 379 Nm in torque. After the fix, only 163 horsepower and 369 Nm remained. The numbers may not seem that different but the torque curve has changed completely. Before the fix, maximum torque at nearly 380 Nm was found between 1500 and 2300 rpms. After reprogramming at Volkswagen, the torque curve slopes. At 1500 rpms, the engine only provides 220 Nm. It is not until 1900 rpms we get the maximum 369 Nm. Since this is the rpm interval most used in a diesel car, the effect is felt almost constantly.

“I feel a difference both at high and low rpms”, he says.

When the customer returns to pick up his or her Volkswagen product after the fix, it is accompanied by a certificate stating that it now lives up to the emissions standards. In addition, Volkswagen assures the customer that the car’s performance is not affected.

“The measure does not adversely impact the engine performance, fuel consumption, CO2 emissions, maximum torque or noise of your vehicle, and all values related to the type approval remain unchanged.”

However, our test results show the opposite.

“I’m disappointed in Volkswagen. First, they cheat on the emissions purification and then they lie to the customers. They promised that the car would be exactly as before the fix, but that’s not true. My car is considerably weaker”, says Erik Lehfeldt.

Comment: Our measurements clearly show that the torque curve has been moved and is flatter after Volkswagen's fix.

Further down the page you will find more results from our before and after tests.

Teknikens Värld’s chief tester Hans Hedberg used to own a Volkswagen that was fixed.

“My first reaction was that the car was considerably weaker at lower rpms and the moment the clutch engaged after starting was weaker. I had to shift down more often to get the same sense of power as before the measure. The differences before and after the fix were striking”, says Hans.

“When I drove Erik Lehfeldt’s Alltrack before the measure it was an alert car that was quick to start in traffic. After the measure it wasn’t as keen to get going in traffic as before. It was slightly slower and the alertness I experienced before was completely gone. At motorway speed and on regular country roads however, I couldn’t feel any difference. Starting, stopping and slow-moving queues made the car feel lazy”, says Ruben.

Ingemar Denbratt, professor at Chalmers University of Technology has reviewed Teknikens Värld’s test results and has two theories as to how Volkswagen’s fix has affected the engine.

“Based on the measurements it seems torque has been reduced at lower rpms (at a given number of rpms). There may be several reasons for this. The goal has been reducing CO2 emissions and to achieve that you can either increase exhaust gas recirculation (EGR) or postpone the time of injection (or a combination of these). Both measures lead to lower torque (and higher consumption). But to be certain as to what has been done more information is needed, such as a complete torque curve, fuel consumption, CO2 emissions and exhaust temperature records”, says professor Ingemar Denbratt, Head of Division of Combustion at Chalmers University of Technology.

Not only the two-litre diesel engine is being reprogrammed. The 1.6 litre, 102 horsepower diesel is also among the affected engines. Here, Volkswagen has chosen a different technical solution which also comprises installation of a so-called flow straightener. This might be the reason the results are better – none of the two 1.6-litre engines we have tested have lost power. In one of the cars, a Volkswagen Golf, we actually saw an increase in power and torque. But as in the case of Erik Lehfeldt’s Passat Alltrack, the torque curve has shifted. Before the fix, the engine provided 170 Nm at 1800 rpms, but afterwards the number was down to 160 Nm at 1800 rpms.

Not only Volkswagen is affected by the recalls, the other brands in the group have also been affected. They have all cheated and taken a shortcut to meet the emission standards, and the engines are the same whether they’re fitted in an Audi or a Skoda.

The owner of a tested Skoda Yeti thinks its driveability has worsened after the measure.

“The engine feels weaker at the rpms I usually run, which is below 2000. It has deteriorated too much for me to accept”, says the owner.

We have also tested two Audis, both with two-litre diesel and 177 horsepower engines. The first, an Audi Q5, had 165 hp before the reprogramming. Afterwards it had 159 hp. This perhaps is not much of a difference, but the loss of torque was much worse. It went from 361 Nm to 336 Nm.

In other words, there are some discrepancies in the results. Most of the tested engines have lost performance, but indeed some cars have improved. Regardless of the average outcome, the owners of the cars that have lost performance have every right to be dissatisfied. The company may have done the right thing regarding the emissions, but the owners are handed back a different car than what they once paid for.

Teknikens Värld: Our tests show that the cars’ torque curve has shifted after the measure. Both owners and test drivers find that driveability has worsened since the torque peak is found at different rpms than before. So why does Volkswagen say that the measure “does not adversely impact the engine performance, fuel consumption, CO2 emissions, maximum torque or noise of your vehicle”?

“We rely on an external authority (the German KBA, Kraftfahrt Bundesamt) which has tested the affected cars, approved them and told us that there has been no adverse impact. In addition, several independent tests have been made in Europe and none of them have shown the cars to have been adversely affected.

We track customer satisfaction after the measure and after reprogramming 75.000 cars in Sweden only 0.1 percent are unhappy, and the reasons for their dissatisfaction vary. In Europe, where nearly four million cars have been fixed, the numbers are the same.”

Teknikens Värld: But you must have tested the cars thoroughly. Don’t you see the difference on the torque curves?

“The same applies there. We rely on the tests and approvals issued by the German authority in charge, KBA.”

Teknikens Värld: How will you compensate owners who are unhappy with the result of the measure?

“If a customer is not satisfied, he or she should contact the workshop. This applies to all types of measures, even those unrelated to this specific issue. Then we will have to see if something may have gone wrong or what the reason might be.

Comment: Yeti 2.0 TDI 140 4x4 from 2015 with manual transmission has actually got a slightly higher max torque. But the engine must be revved harder to give full power. To get 300 Nm the engine must reach above 2000 r/min.

Comment: Q5 TDI 2.0 177 model year 2014 with automatic transmission and four-wheel drive suffer a considerable loss of torque. The car also loses six horsepower after the fix. These are differences that you clearly feel when driving.

Comment: A Caddy from 2011 with the 102-hp diesel engine, automatic transmission and front-wheel drive is holding up relatively well. Again, we see a changed torque curve, but not as much as in other tested engines.

Comment: The test car – a 2009 Passat CC TDI 170 with manual transmission and front-wheel drive – loses the max torque and needs higher rpms to reach the same torque as before.

Comment: Sharan 2,0 TDI 140 from 2012 with automatic gearbox and front-wheel drive shows the same results as the other cars – lower max torque and less torque at low rpms.

Comment: Golf 1,6 TDI 105 from 2012 with automatic gearbox and front-wheel drive gives a slightly higher max torque after the update, but needs, like the other cars, more rpms.

Addition: We have tested more cars, but due to lack of space in the newspaper, these are not currently listed.