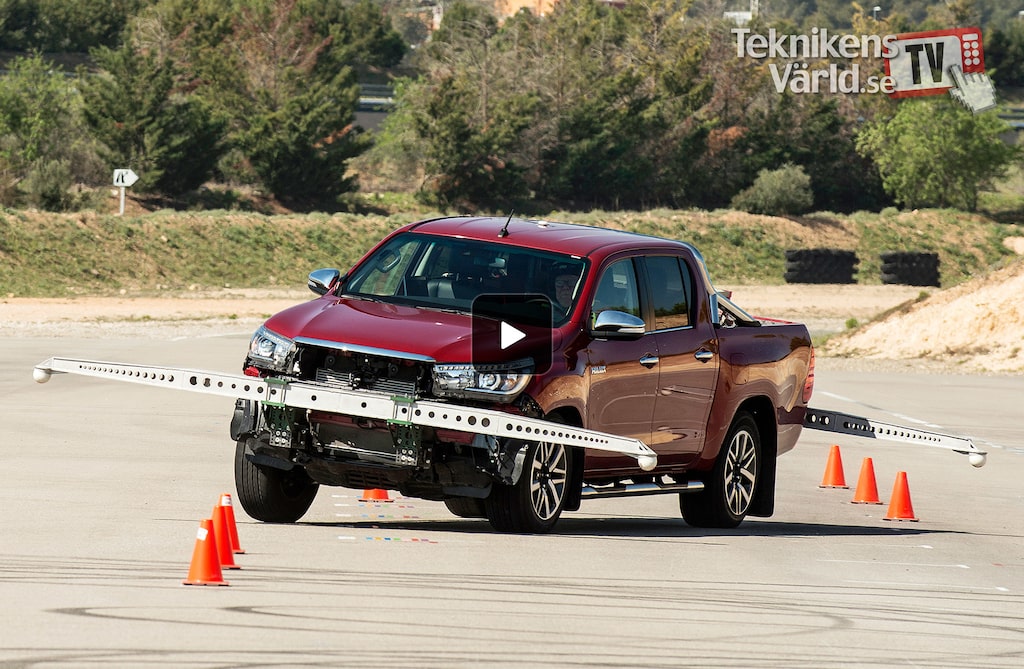 Ämnen i artikeln:  pickup Toyota Toyota Hilux moose test elk test avoidance maneuver In English
Toyota Hilux Double Cab was close to tipping over in the avoidance maneuver test (moose test) in the fall of 2016. In the middle of February 2017 Toyota unveiled a package of measures to us. We have now tested the fixed car in Spain – with good results.
https://delivery.youplay.se/load.html?zone_id=702&player=sp&part_id=124870&addons=000&time=0&disable_sharing=false

This article and video are also available in Swedish.

When the Toyota Hilux went up on two wheels and was about to tip over in the avoidance maneuver test (moose test) last fall, we were frankly surprised. We believed this kind of behaviour was a thing of the past, but we were wrong. This is, if nothing else, a clear signal that the avoidance maneuver test, no matter how many electronic stability control or anti-rollover systems today’s car have, plays an important role in today’s automotive world as an independent test.

What is happening right now is a testament to just that. We are here at the test area IDIADA just south of Barcelona in Spain – a facility commonly used by the automotive industry and the suppliers. At a meeting in Stockholm this February Toyota presented to us the package of measures designed to address the Hilux’s tendency to tip over in the moose test.

The Toyota delegation greeting us in IDIADA a sunny Sunday morning in late March is a big one. In total we count to a crew of ten people from Toyota were the majority comes from the company’s department of development. We start the day with a short briefing where Toyota people with Takenari Yamaguchi (Technical General Manager Vehicle Performance Engineering) at the forefront, once again go through what has been done with the car and what we are about to do today. In summary, the package of measures consists of a reprogrammed electronic stability control and elevetad tire pressure (+0,3 bar cold pressure) in the front tires at full load. Then – we are off to the track.

The test is performed entirely according to the standards we use back home in Sweden. On site is also a Ford Ranger as a reference vehicle, a choice Toyota made since the Ranger is the best selling pickup in this segment in Europe. We start of with driving the Ranger and find it’s behaviour to be what we are used to.

Then, it is the Hilux’s turn. Ruben Börjesson is driving for team Teknikens Värld and puts on the prescribed safety helmet and I take place in the rear seat as the front passenger seat is completely cluttered with Toyota’s test equipment.

A look in the rearview mirror

When testing in Teknikens Värld issue 24/2016, the new Toyota Hilux revealed obvious tendencies of tipping over already at low speed, while all other cars in the test showed a safe behavior.

It is not the first time that Toyota Hilux is close to tip over. In the test published in Teknikens Värld issue 23/2007, see article and film here, the behaviour was the same at the low speed of 57 km/h (35.5 mph). The tested car was extra-equipped with 16-inch wheels whose wider tires gave too much grip. This, along with the lack of electronic stability control system and high center of gravity, gave the vehicle rollover tendencies.

The new Toyota Hilux (extra-equipped with 18-inch wheels) showed similar behavior as its predecessor. This despite the fact that the car is now equipped with electronic stability control system.

The news about our test results in the moose test spread around the world and the reactions came immediately. Right now, our film from the moose test has been shown 9.5 million times.

At the end of October, a Toyota delegation visited Teknikens Värld's editorial office for a first meeting after the test results have been published – the purpose was to create a better picture of what has happened.

In the middle of February, Teknikens Värld and Toyota met again – we were told that the car manufacturer is working on a Hilux package to address the issues.

The first runs with the Hilux, which is loaded to a total weight of 3 210 kilograms (7 077 lbs), at a speed of 55 km/h (34 mph), is absolutely undramatic. At 57 km/h (35.5 mph) we feel the electronic stability control system operating and the car runs through the track with full control. So as well at 59, 61, 63 and 65 km/h (36.5, 38, 39 and 40.5 mph). The more we increase the speed, the more work is being done by the electronic stability control system. The system does it’s work by lowering the speed on all four wheels. Only when we reach 67 km/h (41.5 mph) it becomes evident that the steering isn’t fully up to the task. In the last third section of the track the hydraulic power steering system goes stiff for a moment, but the car is still able to make it through the course.

Co-driver Linus Pröjtz was placed in the rear seat of the pickup during the test. The front seat was occupied by computer equipment for measurements. Behind the wheel Teknikens Värld's Moose Test guru Ruben Börjesson.

We perform the test several times and not once do we see a lift of the car’s inner wheel, all forms of tendency to tip over is gone. There is some body roll, of course, but it doesn’t affect the performance of the car during the test. We get quite a few impulses in the steering wheel as the load is at a maximum and it is not easy for Ruben to get the car trough the track, but it is possible. Thus, we conclude the test – Toyota Hilux can handle the avoidance maneuver test. We will of course proceed with a test at home in different conditions. To our delegation consisting of Ruben Börjesson, Linus Pröjtz and Marcus Engström it is clear, however: The corrected stability control system makes all the difference.

After the test we are told that it is only the Hilux Double Cab sold in the European market that is in question for the update (cars manufactured at Toyota’s plants in Thailand and South Africa). We also know that it is only here in Europe that the vehicle’s total weight is 3 210 kg (7 077 lbs) compared to, for example, 3 000 kg (6 614 lbs) in Australia, 2 910 kg (6 415 lbs) in Argentina and 2 750 kg (6 063 lbs) in Thailand (less payload means lower total weights). In Sweden the Hilux is sold in the three different versions; S Cab, X-Cab and the soon to be updated D-Cab. The latter accounts for over half of the total sales in Sweden.

After driving through the track several times, Linus and Ruben talks about their experience of the fixed Hilux. The car is now capable of reaching Teknikens Värld's moose test at 67 km/h (41.5 mph), and our only comment is that the hydraulic power steering gets a bit heavy at a late stage through the track. Toyota's goal is to update all affected Hilux cars before the summer. 700 Hilux cars already sold in Sweden will get the update afterwards. How this will be accomplished is still not decided.

Exactly when the package of measures will be put into production remains to be seen, the answer is still “as soon as possible” – preferably before the summer. As for the custormers in Sweden who already bought a Double Cab car, they will be addressed but Toyota Sweden is unable to say when.

We leave Spain with the assurance that Toyota has solved the problem, which is very good news. If you own one of the (in Sweden) 700 so far sold Hilux Double Cab our advice is simple – keep in touch with your Toyota dealer for further information. Or do as always – stay tuned to Teknikens Värld in paper and on the Internet.

In order to perform IDIADA evasive maneuver tests, it is necessary to mount so-called outriggers on the car, which will catch the car if it starts to tip over. The red car is exactly the same car that we tested in Sweden last fall.

One difference is that there are liquid containers serving as weight on three of the five seats in the car. From the beginning there were four, but after a while, Linus was allowed to ride in the back seat.

The Applus+ IDIADA test facility, in the automotive industry simply referred to as IDIADA, is actually part of a world-wide technology company that accomplish consultancy services in areas such as gas and oil, automotive and IT. The company is called Applus+, but everything started with IDIADA - which then was not a test track. The abbreviation stands for the Institut d'Investigació Aplicada de l'Automóbil, or in English; the Institute for Applied Vehicle Development. It all started as a part of the Technical University of Barcelona in 1971.

The part of IDIADA we use is the test track just south of Barcelona - a facility used solely by the automotive industry. Security checks are rigorous, mostly because it is a test facility for masked prototypes almost every day, all year round. That is why we have to leave our phones at the entrance and Marcus, the photographer, has a security guard with him all the time.

The track was ready in 1994 and within the ten-kilometer high-speed oval track that surrounds the area, there are almost all test possibilities you can imagine. Wet and dry lanes of different types and with different types of ground, comfort lanes, and lanes built to be able to deliver certified test results. In short, here is almost everything, and the course is open for testing 24 hours a day, seven days a week.