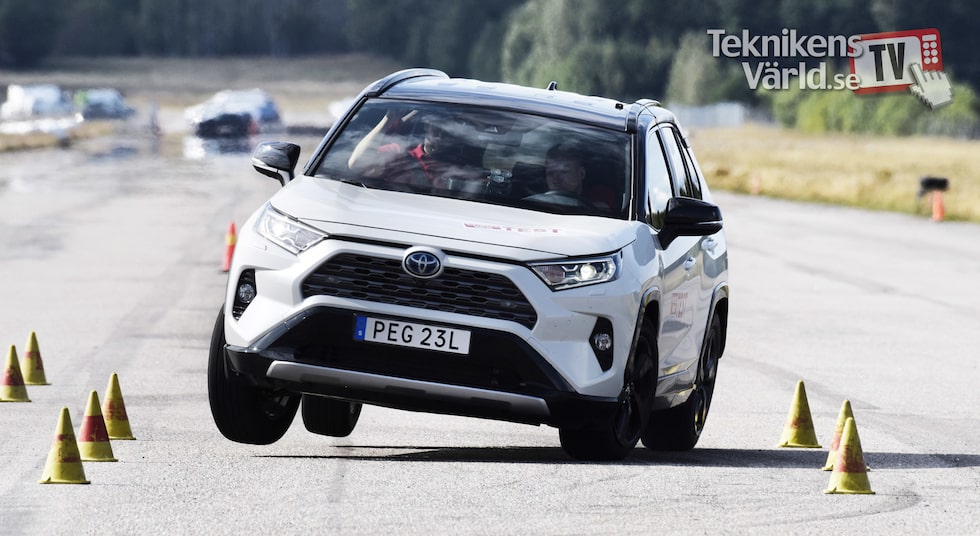 Ämnen i artikeln:  SUV Toyota Toyota RAV4 moose test avoidance maneuver
In this fall's big SUV test of the swedish car magazine Teknikens Värld, the new Toyota RAV4 shows many positive aspects. However, when the safety is examined in the moose test, the RAV4 shows a completely different side. The behavior in the avoidance maneuver test is so dangerous that, until Toyota corrects the error, our advise is to not buy the car.

. We already then noticed a poor performance through the moose test track, where the maximum speed was measured to 68 km/h (42 mph), in other words not approved (70 km/h is the lower limit). The behavior was really bad with strong skid tendencies and the electronic stability control system engaged very late.This was at the beginning of the spring season and we knew we would return to the model during the year. The concept of SUV is on everyone's lips, Toyota is the worlds largest car manufacturer and now it is time again. In fact with exactly the same car as in the previous test. And the behavior is repeated, this time with a negative undertone. Whether it is due to higher temperature (now plus 23 degrees Celsius versus about plus 10 degrees last time) and supposed better grip we do not know, but we see a trend that is alarming.

Toyota RAV4 has quick front end reactions when we turn left into the lane. When we turn right it cuts in and the car goes up on two wheels. But the behaviour varies. Sometimes it goes up on two wheels with extreme reactions including severe skid tendencies, other times the car bounces sideways through the moose test and manages, in the midst of this hard to handle behaviour, to ease the worst forces and avoids going up on two wheels. But instead the car becomes willing to skid sideways.After much effort and great hassle, we manage to reach 68 km/h (42 mph) – a speed that is not approved.

The blue reference car has the same specifications as the white car, and behaves just as poorly. After much effort and great hassle we manage to reach 68 km/h (42 mph) which is not an approved speed in the moose test. For example, Kia Sorento manages 78 km/h together with safe and easy driving in the moose test. Foto: Glenn Lindberg

We bring another Toyota RAV4 Hybrid AWD-i to the moose test track, this time a blue one. We fill it to maximum load according to the car's specification and raise the tire pressure according to the manufacturer's recommendations. We then perform the test again - with exactly the same result as before. We change drivers. Same result. Which sums it all up - the world's largest car manufacturer Toyota has once again released a product on the market that fails to perform safe through the moose test.

In Teknikens Värld issue 20/2019, which is available in stores from today, you can read our large test of 14 different SUV vehicles, including the poorly moose test performing Toyota RAV4.

• The Toyota RAV4 performs poor in the moose test and goes up on two wheels at 68 km/h (42 mph). How can such bad behaviour let through at Toyota again?

• Why doesn't Toyota prioritize safe behaviour in a maneuver?

• Have any internal procedures at Toyota changed after the Toyota Hilux failed the moose test in 2007 and 2016?

“At Toyota, the safety of our customers is our number one priority, and to ensure their security, we apply strict safety tests during the development of all our products.

Our internal tests fully meet the global standards for obstacle avoidance, and since 2016, we have updated our processes to also reflect the procedures used by Teknikens Värld. During its development stage, RAV4 successfully passed all internal tests, including the ISO 3888-2 and the Teknikens Varld Elk test.

We give our assurance to all Toyota customers that they can be confident in the safety of their vehicles.”

In 2016 it went like this for the Toyota Hilux. The film from the test has been viewed over 15 million times.

Unfortunately not the first time for Toyota

Toyota's alarming trend through the moose test can be traced back to 2007, more specifically to the test of the Hilux in Teknikens Värld issue 23/2007. At that time, the pickup lacked electronic stability control system and the silver-coloured car went up on two wheels and was close to flipping over at such low speed as 57 km/h (35 mph).

Toyota dissected the failure, which soon resulted in sales stop for cars equipped with 16-inch wheels whose wider tires gave too much grip. It may seem like a sensible reaction, but the most important question was left unanswered - why at all was the car launched to the market with these “features”?

The story of Toyota's problems in our moose test began in Teknikens Värld 2007 where the Hilux was very close to flipping over.

Nine years later, it was time for a generation shift for Toyota Hilux and in the fall of 2016, more specifically in Teknikens Värld issue 24/2016, the new pickup truck was being tested against competitors. And in the moose test, the red Hilux went up on two wheels and was close to flip over.

The test car was standard equipped with electronic stability control system and extra equipped with wider 18-inch wheels, but why flipping over because of that? Again, there will never be an answer as to why the car was launched to the market with these “features”.

Then follows both negative and positive things. The negative is that parts of Toyota's Swedish dealer network spread incorrect information and pure lies about what had happened as well as how Toyota centrally acted regarding any updating of the model. We took part of the rumours and decided to incognito make phone calls to hear the lies for ourselves. We were met by lies and incorrect information. “The behaviour was nothing to worry about and the flipping over tendencies were already fixed” was misinformation we took part of - despite the fact that the model still had flipping over tendencies and that Toyota had not done anything about it until then point.

Seven months later Toyota invited us to the test area IDIADA outside Barcelona to present the package of measures to the Hilux. The tendencies was now completely gone. Foto: Marcus Engström

The positive bit was that Toyota actually produced a package of measures that was presented to us and that we got to test it seven months after the first test. By then a much better working electronic stability control system was observed and the flipping over tendencies were completely gone. But again, how did this behaviour pass all the development stages, all the accurate engineers and Toyota's final approval, just to be discovered in the moose test of Teknikens Värld? It is as depressing as the new Toyota RAV4's performance in the moose test.