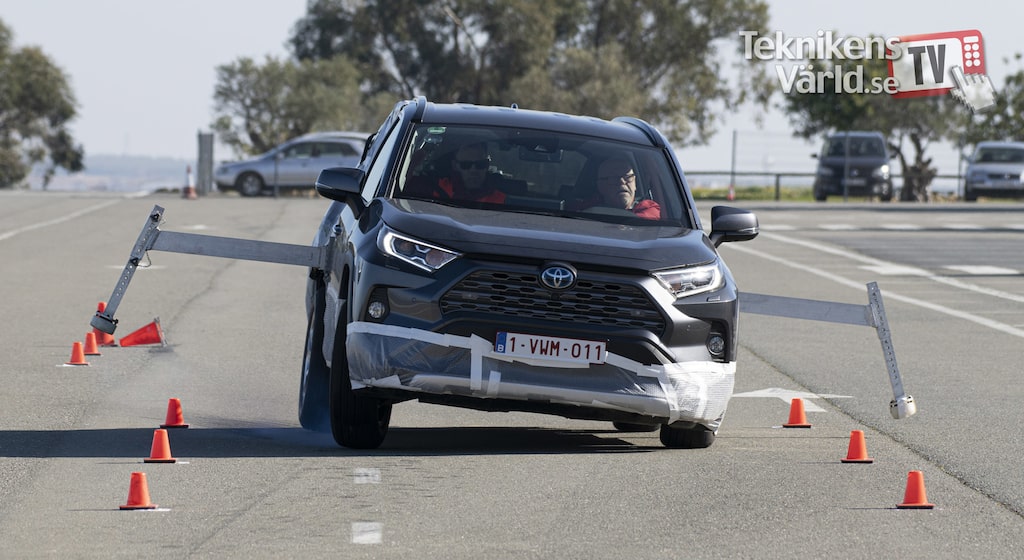 Toyota RAV4 handles the moose test after an update

Ämnen i artikeln:  SUV Toyota Toyota RAV4 ESP moose test avoidance maneuver In English AWD-i
In the first test of the latest generation of Toyota RAV4, almost a year ago, the completely new car did not make a good impression in Swedish car magazine Teknikens Världs famous avoidance maneuver test, called the moose test. Toyota took the critics seriously, and now Teknikens Värld has tested a RAV4 with updated VSC, vehicle stability system – but the question is: Where will this lead in the end?

The latest generation Toyota RAV4 was launched in early 2019 and as of this writing around 115,000 cars have been delivered to customers in Europe. In Teknikens Värld's first test of the model in the spring of 2019, obvious deficiencies were discovered in the moose test. The electronic stability control system (also called VSC) did not perform well enough, the chassis reactions made the car difficult to handle and the swaying was extremely noticeable. The car managed 68 km/h (42 mph), but not higher speeds that that. This was repeated on several occasions and with different RAV4 cars.

We communicated this to Toyota, and to make a long story short – today we are in the parking lot of the Circuito Monteblanco racetrack just outside Seville in Spain with the mission of driving Toyota's updated RAV4. We would have liked to run the test in Sweden, which we also tried to do in November

. But heavy rain made it impossible, mainly because the asphalt does not get dry and the temperatures are too low – despite the mildest winter in the memory of mankind.

the report published here). The measures that Toyota implemented on the RAV4 after the problems in the moose test are limited to a single point. Takashi Saito's business card says Manager/Technical Senior Manager Vehicle Dynamics, Vehicle Performance Engineering Toyota Motor Europé NV/SA. Behind the extremely long title hides the man who will give us the answers to the changes.

– We have updated the VSC system. Nothing else, says Takashi Saito, who continues:

– The system now works with more braking and it is only software update that lies behind this.

It sounds almost a little too simple, but nothing could be more wrong. Rather, it is evidence of how extremely important the electronic stability control system and its programming are for how the car will behave in a panic situation.

When we normally run our moose tests, we fill the car with as many passengers as it can take (four in this case) and load it with sandbags in the luggage compartment to reach the total weight allowed for the specific car. The sandbags are tightened, but there is a slight movement in especially the people sitting in the car – thus exactly as in real life. Toyota has loaded the car with weight that is firmly mounted in the car. In addition, the car is equipped with anti-tipping protectors in the form of aluminum legs that extends through where the rear doors normally are. So not quite as usual for us, we expect the fixed weight to make the test a bit easier for the car.

Fixed load is easier to handle than people. According to Toyota. Foto: Marcus Engström

Test driver Ruben Börjesson takes place behind the wheel and I myself take place in the passenger seat. Already in the first attempt at 65 km/h (40 mph) we notice a big difference. The distinctive steering response that we previously experienced in the RAV4 is partially gone. At the same time, we notice interference from the VSC-system and the car goes through the track without any problems. We increase the speed to 68 km/h (42 mph), which was the limit of what the car previously managed. Then with a slightly bouncing behavior, the inner wheels lifted off the ground and the interventions from the VSC-system were almost non-existent. But now the maneuvering is smooth. The bouncing behavior from the past is gone as are parts of the steering response, which is good. With very distinct steering response, forces that the rear end can't really handle increases – which is not happening now.

At 70 km/h (43.5 mph) we notice that the suspension compresses on the outer side and the car sways, the precision is not fantastic – but it is not a problem to pass the moose test. We then increase the speed to 72 km/h (45 mph) and the car can manage this speed this too, solely thanks to a much better working electronic stability control system. The car understeers slightly over the front tires at the first left turn, but maybe that is why the forces for the rest of the car don't get too big. In other words – the Toyota RAV4 is now approved in the moose test. Even with the tougher requirements that we have introduced from now on.

All good then? Not yet. Strangely, Toyota does not provide a straight answer to how and when these changes to the vehicle stability system will reach production. Right now, the answer is that the modified system will be made available sometime during the second quarter 2020. Maybe in late April or May. But as for now, no recall of already delivered cars is planned, nor is the new software for the vehicle stability system uploaded into the cars during normal service. Instead, it is up to you as a customer to specifically ask for the update and require it.

Linus Pröjtz and Takashi Saito from Toyota Motor Europe talk about the RAV4 and the update of the ESP system. Foto: Marcus Engström

New cars will not currently receive the new software in production, but perhaps when importing to Sweden and other contries? Maybe even at the dealerships before delivery? There is no straight answer and at some point during the post-test meeting, Toyota termed the update as a “performance package”. Extremely strange.

Toyota has done a great work and developed a much more efficient working VSC-system. All in order for the Toyota RAV4 to pass through an avoidance maneuver safely. Because in reality, maneuvers do not occur on a track with cones, but on a road with an actual moose that weighs several hundred kilos and also with fellow road users. So why not introduce it by default? That question still stands unanswered as we leave Circuito Monteblanco. Which means we are forced to return in this matter, because 115,000 existing car owners plus all the becoming owners deserve straight answers from Toyota and a safe behavior in the RAV4.

The story about the RAV4 in the moose test

In 2019, the latest generation Toyota RAV4 was introduced in the European market and Teknikens Värld performed the first test with the brand new car (2.5 VVT-i Hybrid, the only model sold in Sweden) in issue 11/2019. In the moose test, the car turned out to be underperforming and failed to pass the 70 km/h (43.5 mph) limit for approval. Our notes sounded as follows:

The Toyota RAV4 surprises with its negative results through the moose test, in addition with a behavior we do not see very often. The front grip is really good and the car bites into the ground which is unusual for a SUV. At the same time, the car sways a lot - this behavior, in addition to the front grip makes it difficult for the car to handle the test. Already at 65 km/h (40 mph) our test drivers struggle to stay in the lane, the car is extremely difficult to drive and the width of the lane is not enough for RAV4. But it gets a little better when we go a little faster. Then the car's chassis deficiencies cannot take over, but we manage to change direction - but the intervention of the ESP system (VSC in Toyota language, editor's note) is barely noticeable. RAV4 never passes the approval limit of 70 km/h (43.5 mph) which is poor.

The maximum speed was 68 km/h (42 mph), the top result throughout the complete test of the RAV4. Worth mentioning is that Nissan Qashqai managed 84 km/h (52 mph) and Kia Sorento 78 km/h (48.5 mph), two equivalent cars that perform extremely good results. In Teknikens Värld 20/2019 we returned to the RAV4 in a new test and were then able to repeat the poor test result from the spring - this time with two different RAV4 cars. The following could be read in our notes:

The first time the white car with registration number PEG 23L was driven in test was in Teknikens Värld issue 11/2019. Already then we saw an obvious underperformance through the moose test, with 68 km/h (42 mph) as maximum speed. The behavior was really bad with strong skid tendencies and very late intervention from the ESP system.

Another picture from last year, another RAV4 behaved the same in the moose test. Foto: Glenn Lindberg

This was in the beginning of the spring and we knew we would return to the model during the year. The concept of SUV is on everyone's lips, Toyota is the world's largest car manufacturer and now it is time again. In fact, with exactly the same car as in the previous test. The behavior repeats itself, though with a negative undertone. Whether this is due to higher temperatures (now plus 23 degrees Celcius versus about plus 10 last time) and supposed better grip we do not know, but we see alarming trends. Toyota RAV4 has fast reactions in the front end when we turn left into the lane. When we turn right the car goes up on two wheels. But the behavior varies. Sometimes it goes up on two wheels with extreme reactions including severe skid tendencies, other times the car wobbles sideways through the moose test and manages, in the midst of this hard-working behavior, to release the most severe forces and avoid going up on two wheels. But in connection to this, the car becomes difficult to handle.

After a lot of effort and great trouble we manage 68 km/h (42 mph) - which is below the limit for approval.

We then test another Toyota RAV4, this time a blue one, with exactly the same specifications as the white one. We load it to maximum load according to car's specification documents and raise the tire pressure according to the manufacturer's recommendations. Then we perform the test - and get exactly the same result. We change drivers. Same result.

We tried to perform the tests on Arlanda Test Track 1 in November, but no. It was too wet on the track. Foto: Glenn Lindberg

Toyota took the results seriously and late last year we reported on the measures planned for the RAV4. The idea was that we would test the modified car then, but the weather wanted differently. Here's how we wrote the report:

“During the fall, a number of different prototype versions of the VSC system (ESP system, editor's note) were tested. The reason why they started developing a new version is, according to the Toyota delegation we meet at Arlanda, that they found deviant behavior in the car when maneuvering at higher speeds - far higher than in the moose test. These results have formed the basis for the new setting of the ESP system, where the braking effect has been increased. Toyota announces that the new VSC setting will be relevant for cars intended for the European market and will be put into production in early 2020. Owners of already delivered RAV4 cars will be offered a free upgrade of the VSC system through their service workshop.”