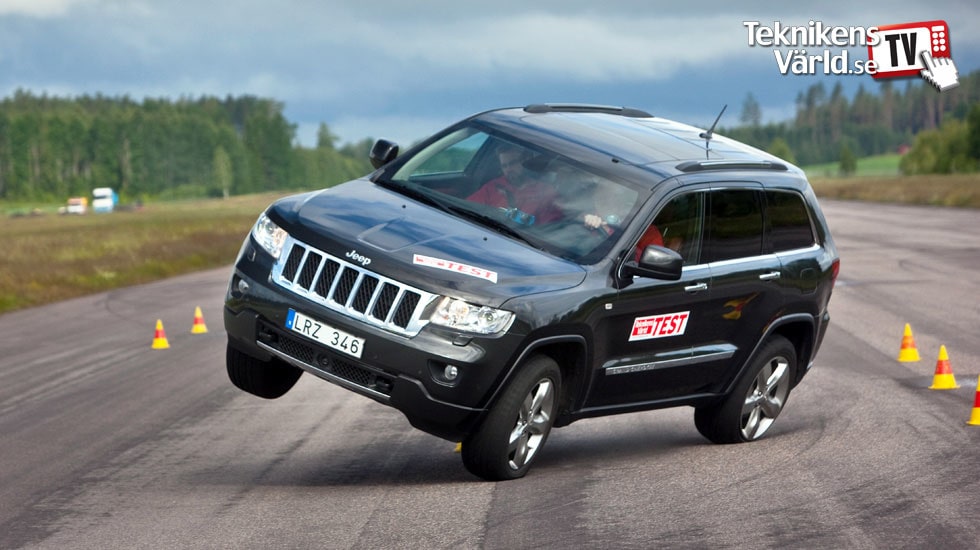 Teknikens Värld tests hundreds of new car models every year. In our car testing the moose test is included which is our proprietary evasive maneuver test where we in a set track simulate a moose, a child or other danger suddenly running out in front of the car. The test clearly shows how well or badly the car performs in a panic situation in traffic. The moose test reveals how well the car's active safety systems – such as traction control and anti-rollover system – work.

Even at 39.5 mph (63.5 km/h) in the moose test the Jeep Grand Cherokee goes up on two wheels, in the middle of the maneuver, and surprises us greatly by being about to roll over. Exactly how high up on two wheels before our test driver has time to prevent a roll over is clearly visible in the image and in the movie above.

– If it wasn't for our professional test driver's quick reaction the Jeep Grand Cherokee would have rolled over. The handling of the car is lethal for the average motorist, says Daniel Frodin, Editor in Chief at Teknikens Värld.

Jeep Grand Cherokee was launched in 1993 and is the best selling car model in its segment in America. The Latest generation of car model went on sale in Sweden 2011.

Despite nearly two weeks of communication Jeep has not provided any information or explanation for the lethal behavior of the Grand Cherokee.

The complete test where the Jeep Grand Cherokee fails the moose test is available in Teknikens Värld 15/2012 and could be ordered online.

We have used two cars as reference cars in the moose test: Volkswagen Touareg and Volvo XC90. Both the Touareg and XC90 can maneuver on the set track at speeds around 43.5 mph (70 km/h) without any tendency to roll over. Other competing car models, such as the BMW X5, can also handle speeds around 43.5 mph (70 km/h) without any problems. Compare the pictures to the right with the Jeep Grand Cherokee and how it performs in the movie above.

When we ran the previous generation of Jeep Grand Cherokee in the moose test in 2005 the car passed the test without any problems. It is obvious that Jeep has been careless in the construction of the current model.

Past failures in the moose test

Teknikens Värld has performed evasive maneuver tests (moose tests) since the 1970s, and it happens every now and then that our test reveals cars that are poorly designed in chassis construction. In 1997 the Mercedes A-Class overturned (see picture) in the moose test, which became a world scoop and which later got Mercedes to redesign the car.

In 2007 Toyota Hilux showed the same tendency to tip over. After Toyota performed their own moose test they decided to stop sales of the Hilux with 16-inch wheels in Europe. The moose test with Toyota Hilux can be seen on film here.