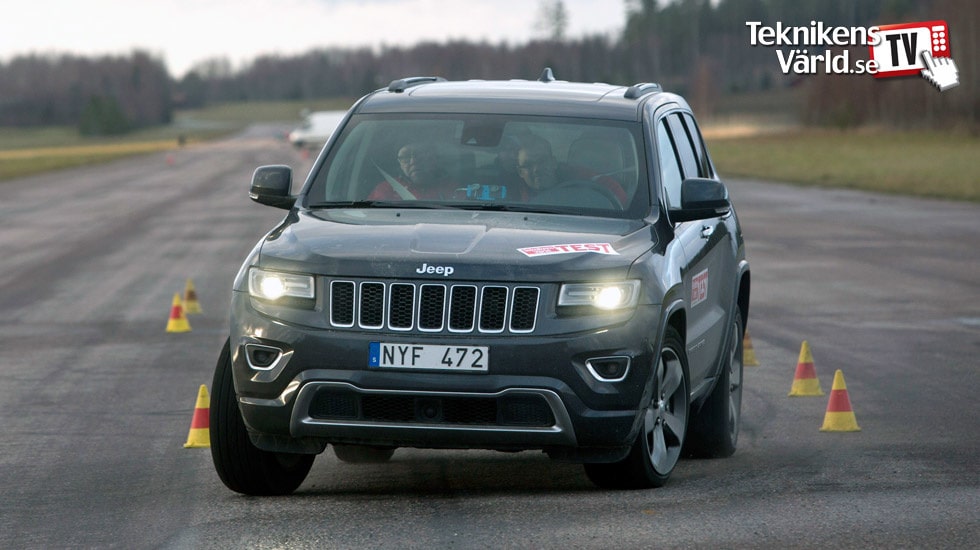 In summer 2012 the previous generation of the Jeep Grand Cherokee went up on two wheels in Teknikens Värld's famous moose test. Already at low speed, 61 km/h (37.9 mph), the wheels on the inside left the ground and at 63.5 km/h (39.5 mph), the car was about to roll over. Neither did the electronic stability system or the anti-rollover system respond – very strange.

We repeated the tests, with different drivers and different Jeep Grand Cherokees, but the result was always the same. Except when Jeep's American engineerers had been given access to the cars and the tests were run on their premises – then the result instead became seven front wheel punctures.

You can read all about the moose test behaviour of the Grand Cherokee in 2012 here and the via the links below, where you also find the film that has been seen by over 2.5 million people worldwide.

In Teknikens Värld issue 2/2014 we test the newly updated Jeep Grand Cherokee 3.0 CRD (the Overland version with Quadra-Lift air suspension) model year 2014, where it is compared against the new BMW X5 and Range Rover Sport.

With summer tires mounted and the cars loaded according to their Swedish certificate of registration, in the case of Jeep Grand Cherokee a total weight of 2 949 kg (6 501 lbs), passengers and luggage included, we go for the test track.

We are delighted to point out that our test results from 2012 have led to a comprehensive development work by the Jeep engineerers, the old behavior is completely gone. The main difference is that the traction control system begins to work really early and it slows down the speed of the car dramatically, even at such low entry speed as 61 km/h (37.9 mph). When we increase the speed the system actually works even more, making the behavior of the car just as safely as it would have been that early summer day in 2012.

At 71 km/h (44.1 mph) the car reaches its limit, the car cannot master more than that. But it is a good result for a SUV vehicle, no doubt about that. It is also a clear sign that Jeep understood the seriousness of the previous generation's severe flaws and did something to it.

The entire test including all moose test results with Jeep Grand Cherokee, BMW X5 and Range Rover Sport is published in Teknikens Värld issue 2/2014 that is available in shops now, but can also be ordered online at teknikensvarld.se.

Do not miss the list showing the fastest and slowest cars in the moose test.